Bank of Canada announces phased out of quantitative easing

Just as Fed Chairman Powell was being questioned in Congress, Toni Gravelle, deputy governor of the Bank of Canada, succeeded in stealing the limelight.

At a meeting organized by local financial professionals, Gravel announced that as the market environment improves, there is already sufficient liquidity for financial institutions to use, and the Bank of Canada will gradually suspend (no renew) the remaining liquidity in the next few weeks. Support the project.

Gravel said that the credit spread of most borrowers is equal to or lower than the level before the epidemic, indicating that the central bank no longer needs to intervene. The Bank of Canada will not evaluate commercial paper, provincial government and corporate bond purchases. It is expected that the central bank’s balance sheet will fall to 475 billion Canadian dollars by the end of April. The central bank’s QE cuts will be gradual and measurable, but did not mention And start to reduce the specific time of QE. The Bank of Canada is currently implementing a weekly Canadian government bond purchase program of 4 billion Canadian dollars.

The Commercial Paper Purchase Plan (CPPP), Provincial Bond Purchase Plan (PBPP) and Corporate Bond Purchase Plan (CBPP) will respectively end according to the termination date (April to May this year) when the project was established. The Bank of Canada stated that it currently does not have any plans to sell liquidity items to purchase securities. The Bank of Canada also announced that the term repurchase operation will be suspended on May 10, and the contingent repurchase facility (CTRF) will also go offline after its expiration on April 6.

When asked whether he would consider buying equity in the crisis, Gravel replied that the Bank of Canada has the ability to “break the glass” (that is, break the routine) move. When asked about the scope of controlling inflation fluctuations, he said that he would be worried about the inflation rate rising to more than 3%. “Although the market indicators for measuring inflation expectations are not worrying, we are worried about the sharp and unstable yields of government bonds. fluctuation”.

He also specifically mentioned the property market, saying that data on the housing market indicated that “there is more investment activity.” The central bank may require additional tools to obtain authorization to deal with property market activities, and may provide adequate property market analysis in the April Monetary Policy Report. , But it may be more concerned in the May report, and more details on the factors driving house price increases will be obtained from the May Financial Stability Report.

Gravel finally pointed out that if the pressure reappears, the Bank of Canada can restart any market project.

After the above news came out, the market reaction was relatively flat, but the Canadian dollar still climbed slightly on its way. 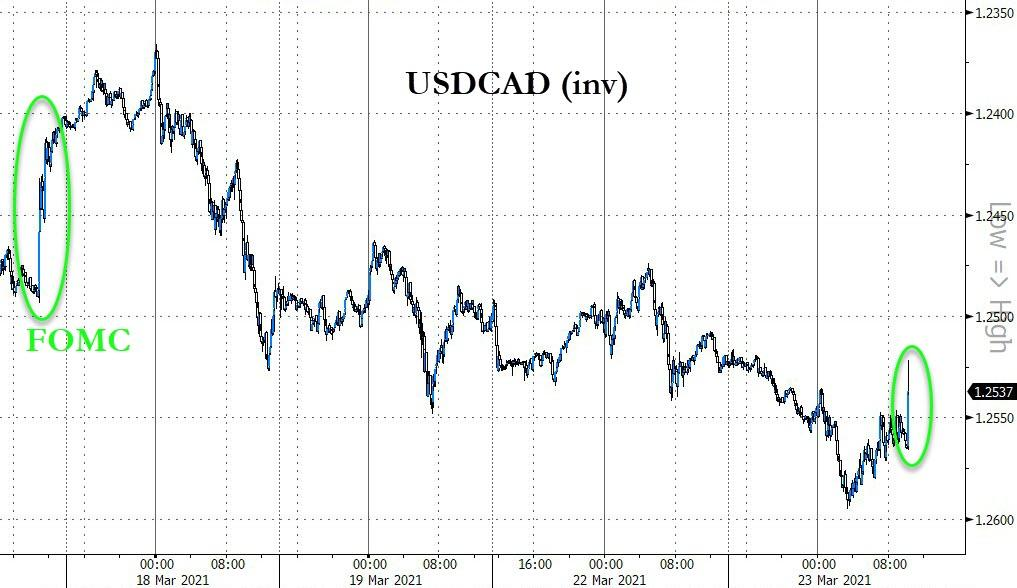 About a year after launching the emergency liquidity program, the latest decision of the Bank of Canada confirms the recovery of market operations and global financial conditions. Just as the Bank of Canada announced the adjustment of the QE rhythm, Powell and Yellen continued to support the stimulus policy of the epidemic in Congress, which once again demonstrated the increasingly divergent global central bank policies.

It is worth mentioning that just the day before, Goldman Sachs issued a bullish view of the Canadian dollar.